The Impact of the United States Reneging on the Paris Agreement

Syria, Nicaragua and the United States are not three countries usually seen grouped together. However, for all intents and purposes their attitudes towards climate change now appear to be aligned. These are the three countries who now officially disagree with the Paris Agreement (note that only USA and Syria think it’s a bad idea, Nicaragua thinks it doesn’t go far enough). Despite President Trump’s comments, the United States cannot actually exit the agreement until 2020. Regardless, this attitude towards perhaps the biggest positive step in tackling climate change is a bit concerning.

The United States makes up around 21% of the projected savings that are targeted by the agreement by 2030. If they stay their current course without any improvement whatsoever it is predicted that by 2025 there will be an extra 1.4 GT of CO2 in the atmosphere (a 3% rise in global emissions). There’s no need to reiterate why this is an ecological disaster and for New Zealand rising sea levels are particularly concerning and even more so for our friends in the Pacific.

Now this decision is not only short sighted in terms of an environmental perspective but also from an economic one. The main motivations behind Presidents Trumps decision appear to be the prevention of job losses in the coal industry and reducing the States financial obligations. However, as can be seen in the figure below, more jobs are currently held in the solar sector, which is a growing industry and would be boosted further by increased climate change efforts. 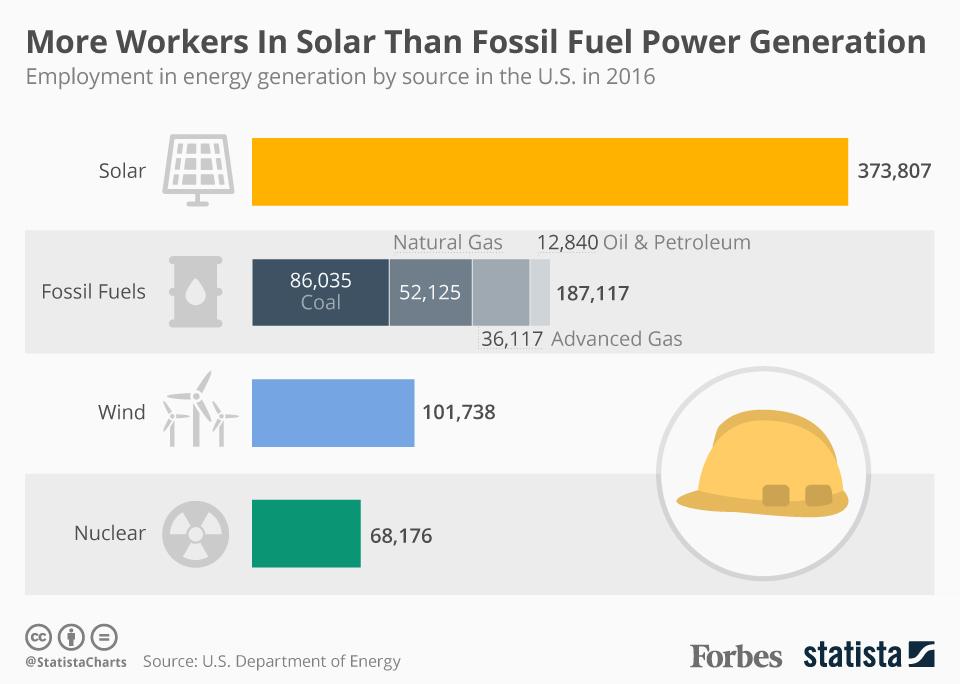 In addition, by leaving the agreement the United States leaves a hole in the leadership system which can easily be filled by China. China has had a very aggressive approach to climate change in recent years as can be seen below. However, it is not for the reasons you’d suspect. Instead of targeting long term carbon reduction, the driving forces have been in the form of immediate reductions in air pollution, security of fuel supply as well as economic reasons. There is an attitude not only by China but many countries around the world that moving forward the only way to stay economically competitive is to embrace renewable energy for the simple fact that it is cheaper. Solar panels are appearing to following Moore’s Law and their efficiency in some environments already means that energy produced from them is cheaper than from coal. This comparison is only going to get better not worse as coal stocks diminish meaning that countries who do not invest in green energy could quite easily be left behind.

For New Zealand this decision is not likely to have massive impact. This is because early indications suggest that all other countries will stay the path and stay committed to the targets that they have set out as a result of the agreement (as soon as they get out of court from not having enough of their plans out in public). Minister for Climate Change Issues Paula Bennet has stated that “It’s really disappointing the US has chosen to withdraw from the Paris Agreement, but New Zealand remains absolutely committed to it.” New Zealand currently has a self-selected target to reduce greenhouse gas emissions by 30 per cent below 2005 levels by 2030. This will be achieved through the use of domestic emission reductions, the removal of carbon dioxide by forests and participation in international carbon markets. It does not appear that any of these approaches will be compromised by the United States leaving the agreement. The carbon market appears to be unaffected by the decision according to Nigel Brunel, director of financial markets for OMF, and it appears likely that long term trading will not be influenced significantly either.

In summary, if the United States decision to pull out of the agreement is actually carried out it will have very negative long term consequences due to causing a projected 3% rise in global CO2 emissions by 2025 (assuming they fully pull out, which they won’t – individual states and cities have already agreed to increase efforts if the White House won’t). However, outside the environmental consequences it is unlikely to have an effect on New Zealand in fact it appears to have galvanised the remaining parties in the Paris Agreement with Brunel stating that it’s  “a little bit like having that grumpy guest at the party that finally leaves, or the kid who picks up his ball and goes home”. Hopefully this attitude isn’t just temporary as there is a lot left to be done and times not slowing down.